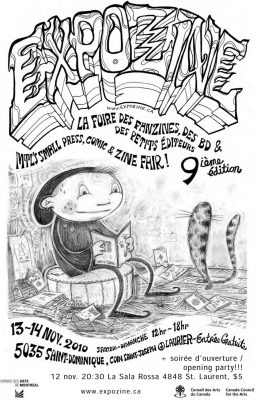 When you walk into the ARCMTL archive centre where Expozine’s archives are held, you feel as though you are walking into a mad person’s fantasy. There are rows of bookshelves that were donated by a library, and each is filled to the brim with eclectic, bizarre and wondrous treasures. It is a perfect representation of the artistic culture of Montreal through its amazing collection of books, posters, prints, knick-knacks, and of course zines! I was asked to rummage through one single year of Expozine’s archives. I was immediately overwhelmed by the history each year held, but I found myself drawn to the year 2010. Upon further investigation, I was thrilled to see just how many now-established artists were jumping out at me.

Right away, I pulled out a zine that was undeniably a Michael Deforge original. Deforge is a Toronto based comic who has multiple graphic novels published with Drawn and Quarterly and Koyama Press. Deforge is thirty-five now, making him twenty-three when he attended Expozine in 2010. As I made these calculations standing alone amongst hundreds of zines, I felt like a private detective who had come across something very rare and special. 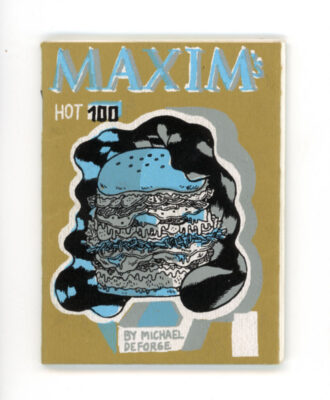 This tiny 3 by 4-inch 20 paged zine called Maxim’s Hot 100, with a hamburger wearing a wig on the cover, made at the very beginning of Deforge’s career, was already remarkable. What struck me was how clean and vibrant it was while only using three colours: blue, yellow, and black. The artistry of this zine stuck out from the rest, and it is clear now that young Michael Deforge had talent and would go on to be a sensation. Did others know, while filing past all the tables covered in zines, that there was an emerging graphic novel giant behind one?

That is what is so amazing about zine culture. It is how most graphic novelists start their careers. It is where the seeds of genius are sown, and why they are so eagerly shared and read by their peers. 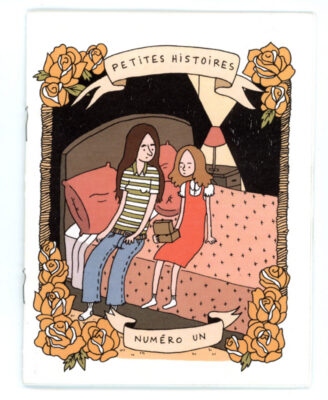 I found a beautiful comic zine by Montreal’s Iris Boudreau, who was up and coming in 2010. Petites histoires: Numéro un is a 4.25 by 5.5-inch zine with eight pages and two short comics inside. One of the stories involves a business woman showing up to buy a seashell with the Cat in the Hat inside for 25,000$ from a girl’s roommate. They are quite imaginative and captivating. She would later go on to make L’ostie d’chat with Zviane in 2013.

There was also a zine by Ohara Hale, who started to publish children’s books in 2013 and is extremely well known and esteemed in her field. The zine, Butts Over Butt, is credited to Christine Hale, as this publication came before her artist’s name change. 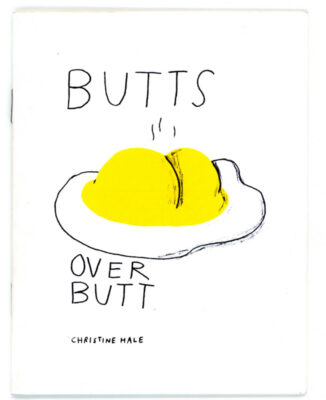 Each page has a drawing of a food with a butt worked into it with a funny name for the meal. For example, one page has pasta with meatballs shaped like butts and it is called ‘Buttghetti and Butt Balls.” It is clever and puts a smile on your face, and I know many children that would find this hilarious. The zine is in black and white and seems to be drawn with a pencil using bold lines. Her line work is similar today however more polished, and her recognizable colour pallet in her current work is where she shines. It is interesting to see how she’s grown.

At the bottom of the stack was the tiniest zine called Catalogue de boulons that immediately grabbed my attention. Each page had a print of a different type of screw on it. Underneath each screw is a little description composed of a collage of words in varying fonts, like in ransom letters. It was so clever and simple, and it was made by none other than Montreal icon Julie Doucet. 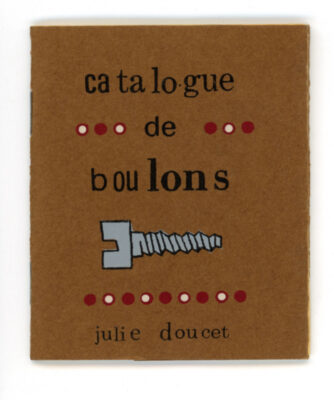 This year, Doucet was given the Grand Prix at the Angoulême International Comic Art Festival, a prestigious career recognition award. I recently spoke to Julie Doucet, whose famous series Dirty Plotte started as a zine in the 80s. I asked her the importance of zines in a comics career. She said, “You have to start somewhere. And you can’t start by doing a graphic novel, a hundred-paged book. Start with short stories, photocopy them and pass them around. That way you learn what people react to.” And this is so true. You need to put your work out there as much as possible. When you are sitting at your Expozine table with your zines on display, you get to observe how the people react to your work. Are they draw to your table? And if so, which piece do they always pick up first? This if how you learn what to invest more of your time in. 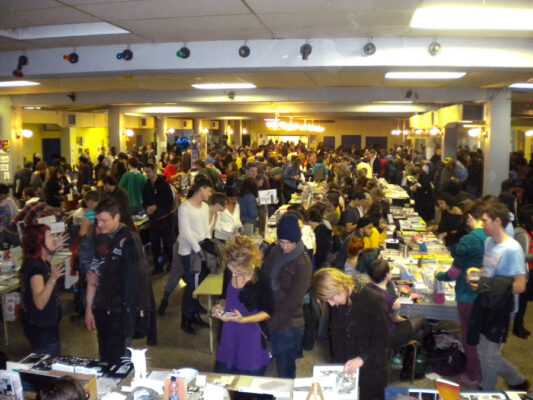 Expozine is an amazing place to discover the next generation of cartoonist and artists. You never know what treasures you will find and which emerging artist will soon be making huge waves.