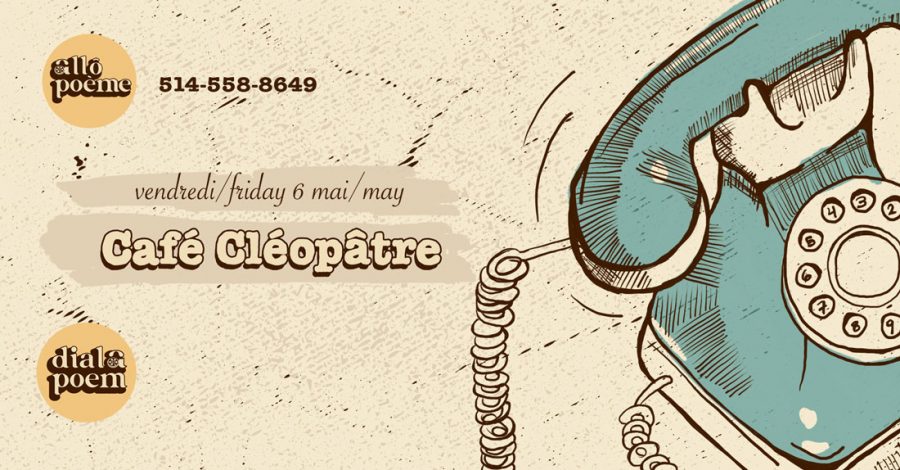 MOMENT – an Expozine reading at the Blue Metropolis International Literary Festival
Friday, May 6, 7 – 9 p.m. at Café Clépoatra, 1230 Saint-Laurent. Free admission
With readings by:
Claudie Bellemare
Marcela Huerta
H. Nigel Thomas
Chloé Savoie-Bernard
Symon Henry
David Bradford
Nelly Desmarais
And your MC : Catherine Cormier-Larose
With this bilingual collective reading in conjunction with the Blue Metropolis International Literary Festival, Expozine continues to celebrate its twentieth anniversary as well as its pandemic-related relaunch of the Dial-A-Poem / Allô-poème service. Since its return in 2020, dozens of poets have had their voices heard on Dial-A-Poem!
Come celebrate with us at the MOMENT group reading. The event presents diverse voices in both English and French reading from new and recent publications, including:

Claudie Bellemare
Claudie Bellemare was born in 1991. She holds a master’s degree in French-language literature from the University of Montreal, where she became interested in the image of the body in the poetry of Roger Des Roches. She is a high school French teacher. She is also a choreographer and teaches dance. In the fall of 2021, she published her first collection of poetry, Nous étions les nerfs rêvant d’une émeute, with Éditions Poets de Brousse.

Marcela Huerta is the author of Tropico, a 2017 collection of poetry and creative nonfiction from Metatron Press. Her work has been featured in Peach Mag, Leste, Bad Nudes, Montreal Review of Books, CV2, Ratchat!, and more.
Tropico the book has been translated into French by Daphne B in 2021.

Chloé Savoie-Bernard
Chloé Savoie-Bernard has written several collections of poetry, the latest of which is Sainte Chloé de l’amour (October 2021, France). At Triptyque, she published the collection of short stories Des femmes savantes (Triptyque, 2016) and directed the Corps collective (2018). She also works as a poetry editor at France and as a member of the editorial board of the magazine Estuaire, while pursuing a postdoctoral internship in research-creation at Sherbrooke University and developing a practice in translation.

H. Nigel Thomas
H. Nigel Thomas is a retired professor of U. S literature and the author of thirteen books: six novels, three collections of short fiction, two collections of poems, and two academic books. His novels Spirits in the Dark (1993) and Easily Fooled (2015) were shortlisted for the Hugh MacLennan Fiction Award. The French translation of Lives: Whole and Otherwise—Des vies cassées—was a finalist for the Carbet des lycéens award. He is the founder and English-language coordinator of Lectures Logos Readings and the editor of Kola. In 2000, he received the Montreal Association of Business Persons and Professionals’ Jackie Robinson Award for Professional of the year; in 2013, Université Laval’s Hommage aux créateurs; in 2019, the Montreal Black Theatre Workshop’s Martin Luther King Junior Achievement Award; and, in 2021, the Quebec Writers’ Federation Judy Mappin Community Award.

Symon Henry’s artistic practice is based on the interaction of three major axes in their creations, namely concert music, visual arts and poetry. This transdisciplinary approach is particularly reflected in their sound paintings — instrumental or performative graphic scores, interpreted here and elsewhere by musicians and artists with as meandering paths as possible.

Their first collection of poetry, son corps parlait pour ne pas mourir, as well as his first book of graphic scores were published in 2016 by Éditions de la Tournure. The poetic-sound collection L’amour des oiseaux moches (2020, finalist for the Governor General’s Literary Awards and the Émile-Nelligan Prize) represented an important achievement in their career, having been published by Omri and of a major production by the Ensemble contemporain de Montréal (ECM+). Symon has also been the artistic and musical director of numerous projects – personal or in collaboration – since 2008.

David Bradford
David Bradford is a poet, editor, and organizer based in Tiohtià:ke (Montréal). He is the author of several chapbooks, including Nell Zink is Damn Free (Blank Cheque Press, 2017) and The Plot (House House Press, 2018). His work has appeared in The Capilano Review, The Tiny, filling Station, The Fiddlehead, Carte Blanche, and elsewhere. He holds an MFA from the University of Guelph and is a founding editor of House House Press. Dream of No One but Myself is his first book.

Nelly Desmarais
Born in 1986, Nelly Desmarais is from Richelieu, in Montérégie. She studied literature at the University of Quebec in Montreal and at McGill University. She has been working in the publishing industry since 2011. Marche à voix basse, published in the Quartanier in the winter of 2022, is her first book.

This event is produced by ARCMTL in partnership with the Blue Metropolis International Literary Festival, and is made possible in part thanks to the support of the Conseil des arts et des lettres du Québec, du Conseil des arts de Montréal and the Canada Council for the Arts.