On October 12, the poets of Montreal publisher L’Écrou, longtime exhibitors at Expozine from their earliest days, met for the last time at Quai des Brumes. This final reading marked 10 years of daring and irreverent poetry that undeniably had its effect on the Quebec literary landscape. Here are the authors who read during this final event. Enjoy!

Born in Montreal in 1962, Fernand Durepos has been publishing for 35 years. Self-taught, he has read in bars, squats, motels, in prisons, on the radio, on TV as well as on stage in addition to collaborating in groups in Quebec, English Canada, France, the States United and Latin America. Finalist for the Terrasses Saint-Sulpice Poetry Prize of the 2004 Estuaire magazine for Mourir m’arrive, he won the SODEP 2018 Excellence Award – literary creation category for his suite of texts, La mort est d’une patience d ‘ tree which every day takes sun in our faces, published in Lettres québécoises.

Marie Darsigny is an artist who lives in Montreal. She holds a bachelor’s degree in creative writing from Concordia University, as well as a master’s degree in creative writing with a concentration in feminist studies from the University of Quebec at Montreal. In 2014, she published a collection of poems in English, A Little Death Around the Heart, with the Montreal publishing house Metatron, then Filles in 2017, her first collection of poems in French, not to mention her self-published zines Hey Girl (2012 ), Plaza Witches (2015) and Black Wave (2015). Then comes Trente, in 2018, with the Editions remue-household. 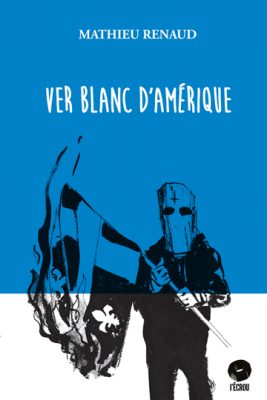 Born in 1989 in the crime capital of Hull, but raised and nurtured in the tranquility of Templeton. He goes through his childhood with only his passports, his remote control and his library card. In 2007, he moved away from the parental organ, in the gurgles of Montreal. He writes a song for the first EP of the Boulay Sisters, publishes his first short story in the last number of the late Somnambule, he participates in the Night of poetry in 2012, rages in the evenings of Fermaille, writes poems in burgers at corner of Rachel and Saint-Laurent. We hesitate to call them love letters or calls for help, in any case the customers leave, it seems, always satisfied. He has just completed his studies in dramatic writing at the National Theater School of Canada. 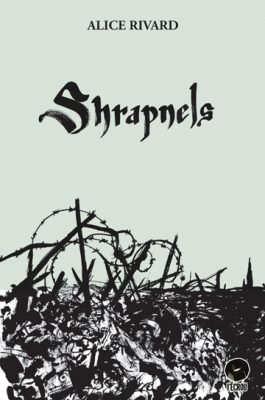 Alice Rivard was born in 1985 somewhere in Bas-du-Fleuve, the product of a copulation that should not have taken place. She then did her best, but not always. So she went from college to a doctorate in sham before flipping a switch and screeching everything there. She now devotes herself to roadkill bone child therapy and writing things that stir the inside out sometimes. To this day, she remains disappointed with everything, does not respect the three second rule when she drops food on the floor, and maintains an inordinate passion for things, including metal, cats and the practice of misanthropy. 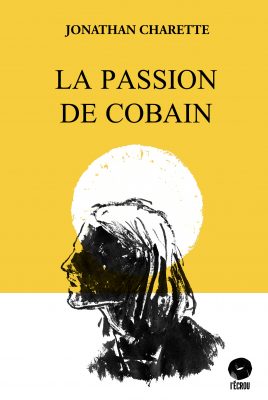 Jonathan Charette was born in 1982. He lives in Montreal and has worked in a bookstore for several years. His texts have appeared in Estuaire, Exit, Les Écrits, Le Sabord and Moebius. He stands out, among other things, thanks to Je parle arme blanche (College student poetry award), La parade des orages en laisse (finalist for the Alain-Grandbois award) and Ravissement à perpétuité (Émile-Nelligan award). Speaking of his work published by L’Écrou, writing Cobain’s Passion took him almost ten years.

Born in Quebec in 1979, Alexandre spent his childhood giving out candy to have friends. Moved to Gatineau at the age of 10, he grew up in a predator-free jungle called Touraine, chasing the boring life of a dormitory neighborhood from the roundabout … He was very early interested in science and the effects of chemistry on her body, the memories of her adolescence can therefore be summed up in 2 days ¾ once placed end to end. He leads a quiet adult life, if at all.

Baron Marc-André Lévesque was born on December 4, 1990 during a snowstorm in Ottawa. Today, Baron dreams of saloon battles and longship trips, and one day wishes to master the bestial forces that lie dormant within him. He wakes up every morning to the sound of the late night show with Johnny Carson. He recently holds a master’s degree in literature as well as a mustache of which he is quite proud. Shy by nature and incapable of lying, he’s not really the one to call when the time comes for bad shots. He divides his life between his front porch in Verdun and nautical excursions. His first collection, Chasse aux licornes, a finalist for the Prix des libraires, earned him a card from the Académie de la vie littéraire and some high-caliber high-fives. Despite everything, the queen still refuses to grant him his title of nobility. Let’s not give up hope. 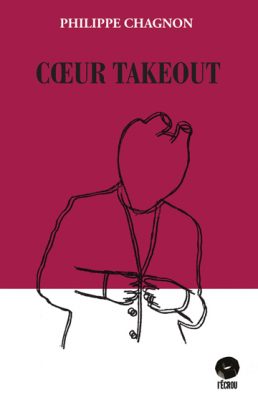 Philippe Chagnon was born in Saint-Hyacinthe in 1986. Through music, he began from an early age to take an interest in the world of the arts. It was in Drummondville that he decided to study double bass. Then, he took the direction of Montreal to undertake university studies (which he would never finish), in philosophy, studies which would bring him a greater openness of mind and good debt. Soon after, he began to paint to expand his means of expression. Throughout his artistic career, Philippe writes and collects poems. He currently devotes himself to writing in all its forms and has published several books.

Frédéric Dumont was born in 1986. He hates summer.

While breaking into the visual arts and music, Virginie Beauregard D. began a writing process in 2005. From then on, her poems were presented in various forms. They are performed in the theater on different occasions. Virginie Beauregard D. participates in several off or notorious events, in Quebec and internationally. She publishes texts in various literary reviews and anthologies. In 2010, she launched her first collection, The Hours are wrong. With a bachelor’s degree in art history and education, she published the collection Une main sauvage in the spring of 2014. It is with this second book that Virginie Beauregard D. is a finalist for the Prix Émile-Nelligan 2015. She is also the winner of the 2016 Jean-Lafrenière – Zénob prize awarded by the public at the Trois-Rivières International Poetry Festival. She is releasing a third collection, The Last Runners, in the fall of 2018, which will be translated into English and published in the United States.

excerpt from the agreed upon, Emmanuel Deraps is ecstatic at the emptiness of his own verses. born from writing the suicide note of Cobain, he hopes more than he believes. the madness that inhabits him is just an extra liver that he wants to give to sick children. 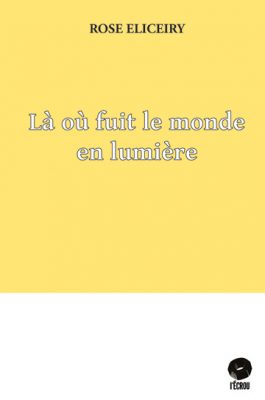 Rose Eliceiry is a Montreal poet. Since 2005, she has taken part in several poetic events in Quebec and elsewhere. In 2011, she published Hommes et Chien Confondus for which she won the Félix-Leclerc Prize for Poetry. She then lived in Brussels, Moncton and wrote a dissertation on poetry as a form of resistance. She prefers small disturbances to great causes, vacant lots to gardens, start to finish, come back rather than leave. In 2017, she published where the world flees in light, her second collection, finalist for the Booksellers’ prize. 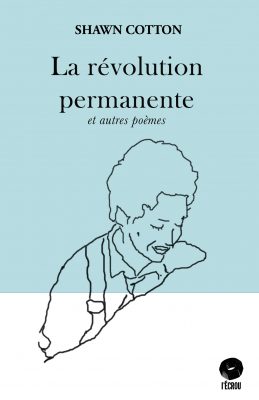 Montreal December ’86, Petite-Patrie until the unfinished high school, locked in the room to undo the meaning of words, the bunker, at Bébé with V., Asia, Hochelaga and the deep crises, Jonquière LSD, great love sabotaged, pretends to be a man of the theater, epilepsy, Groupuscule Skip Jensen 63 concerts in Europe, Weapons to think about, several jobs then finally bookseller, tries the adventure of the big stages with Bernhari, falls asleep a few years after the death of the lover, goes from center to defense to cosom, Macedonia, Finland, today lives alone in Saint-Denis / Laurier and plays the synthesizer for moths while learning to write poems. He published The Permanent Revolution in October 2020. 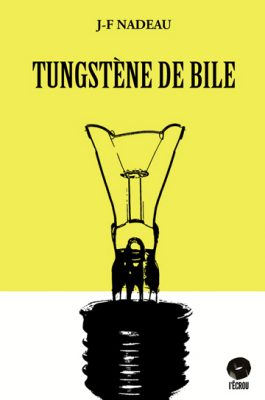 Born in 1975 in Montreal, J-F Nadeau spent his childhood being fascinated by the natural sciences while wanting to become a professional baseball player, until the improv came into his life. After studying literature and cinema, he finally chose the profession of actor and entered the Conservatoire d’art dramatique de Montréal. Since then, he plays and writes for all mediums in a mixture of joy, disillusion and smiling resilience. His personal creations have so far taken the form of spoken word, horror tale, mimodrama, adult puppetry or political humor. Otherwise, he is a cocktail shaker expert, an intermediate drummer and a new father of two daughters. 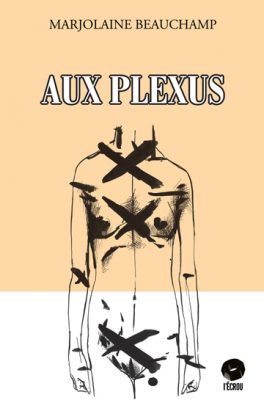 Marjolaine was born in 1982 in Buckingham in the Outaouais. She will represent Quebec at the Slam World Cup in 2010 where she won second place. In 2011, she published Aux plexus, a collection of poetry which won the Jacques-Poirier literary prize at the Salon du livre de l’Outaouais and was a finalist for the Estuaire-Bistro Leméac poetry prize. The Théâtre du Trillium, with which she signed a five-year partnership in 2015 as associate author, produced her play Taram. The play won three Rideau awards, including Emerging Playwright. She is offered by Richard Desjardins the first part of his show L’existoire and will follow him on this tour. She is from the 2015 vintage of the ten young authors to watch from the show The more we are crazy, the more we read! at Radio-Canada. In November 2016, she published her second collection Fourrer le feu with Éditions de l’Ecrou, for which she was invited to the Trois-Rivières International Poetry Festival and finalist for the 2018 Bookstore Prize. Her play M.I.L.F. was produced and aired in the fall of 2017. The production won four Rideau awards including Production of the Year. Marjolaine publishes a few texts in magazines or on literary sites such as Revue zinc, Les filles missiles and Joual de Bataille. She shoots a music video from her collection Fourrer le feu which will be a finalist for several awards. She will occupy the role of guest of honor at the Salon du livre de l’Outaouais 2018. She is the recipient of two awards at the 2018 Culturiades in Outaouais, the Work of the Year award from the Conseil des arts et des lettres du Québec. and also the Creator of the Year award for his MILF piece Without having definitively developed an approach or a portfolio, she is interested in gender relations in artistic practice, at the border between biography and fiction, in creation with people considered to be non-professionals. Uneven, fickle and articulate, she has reproduced twice and fears the moment when her children discover her videos on YouTube.