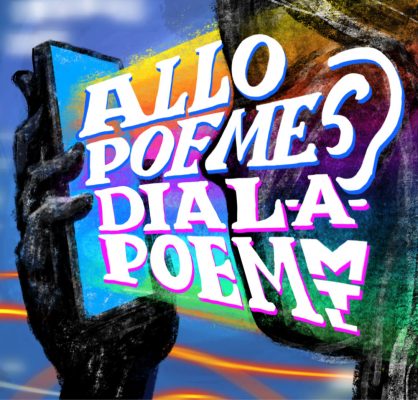 The team at ARCMTL and Expozine are proud to announce Allo-Poèmes – Dial a Poem MTL , a free service presenting several new poetry readings each week, available by calling 514-558-8649!

In 1968, when the sadly deceased poet-performer John Giorno (1936-2019) created the first Dial-a-Poem telephone line, he surely had no idea that his project would inspire similar initiatives all over the world, including twice in Quebec!

The first Dial-A-Poem event was held at the Architectural League in New York City and provided the public with short poetry readings by various contemporary poets via a phone call to 202-628 -0400. To receive the calls in the gallery, 15 telephones were connected to 15 answering machines, which made it possible for listeners to hear a different random recording each time. The service also featured recordings of sound art, political speeches and comedy routines. New recordings were updated daily by Giorno.

Dial-a-Poem has given rise to several live editions, notably at the Museum of Modern Art in 1970, and to a series of album compilations, which have become collector’s items. Among the poets and artists who have participated in the various editions are William Burroughs, Allen Ginsberg, Patti Smith, Anne Waldman, Laurie Anderson, Ed Sanders, John Cage, Philip Glass, Frank Zappa and Robert Mapplethorpe. 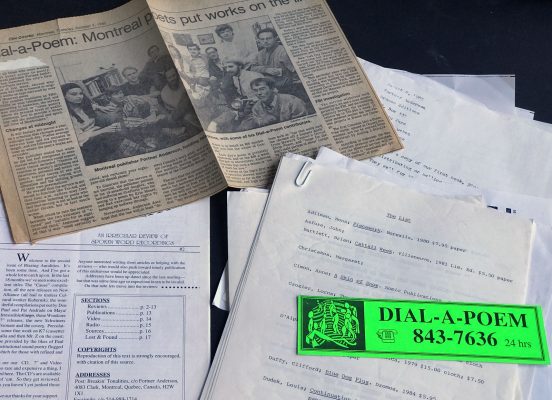 In 1985, Fortner Anderson, then aged 30, set out to meet English-speaking poets in Montreal with his portable recorder to begin Dial-a-Poem Montreal. Until 1987 (with few breaks!), Fortner played recordings of essential Montreal poets of the time, as well as those of a few distinguished guests (Kathy Acker, Henri Rollins!).

The hotline received a considerable number of calls, up to 200 calls per day for the first year. Live readings were also held in venues such as Les Foufounes Électriques and in cafés and art galleries to promote and fundraise the project. 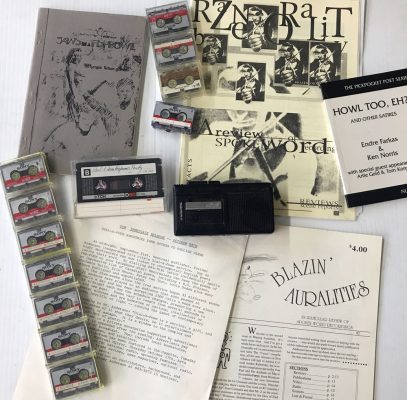 We’d kill to dial up that hotline right now

A May 2020 article on Messy Nessy Chic about John Giorno’s Dial-a-Poem stressed how important access to poetry over the phone was, and still is:

On any given night in 1970, a teen somewhere in rural America could dial a number and hear the radical wisdom of Patti Smith, John Cage, Allen Ginsberg, William S. Burroughs – the list of poets was long, and painfully hip. One needed only the ten sacred digits of “Dial-a-Poem,” a revolutionary hotline that connected millions of people to a room of telephones, linked up to an evolving selection of live-recorded poems, speeches, and inspired orations. And frankly, we’d kill to dial up that hotline right now…

So, fast-forward to 2020: a pandemic strikes, venues hosting literary readings are all closed, the performing arts in general are in forced confinement, as is the entire population! There is a fresh need to explore mediums other than the stage.

As it happens, in 2019, ARCMTL, the non-profit arts and archive organization behind Expozine, had digitized and catalogued the archives of the 1980s Dial-a-Poem project, thanks to funding from Library and Archives Canada Documentary Heritage Communities Programme. 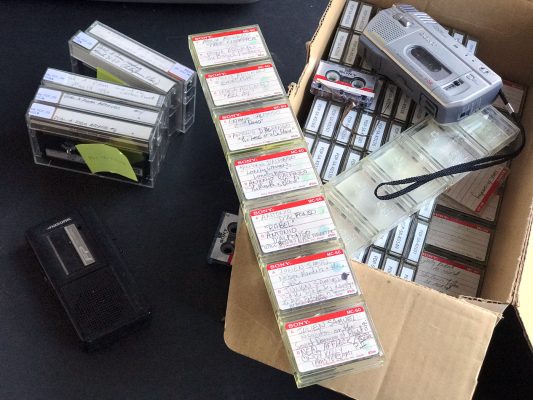 It was while working on these archives with Fortner Anderson that the idea came up to consider re-launching the project for the smartphone era. After all, ARCMTL is well-known for promoting artworks and miniature books through its Distroboto vending machine network, so why not promote poetry readings in a similarly original way?

The arrival of the pandemic suddenly made the idea even more pertinent, and so by mid 2020, poet, publisher and Expozine team member Sébastien Dulude began working with Fortner Anderson to develop a brand new bilingual version of the project. The 2020-2021 edition of Dial-a-Poem / Allo-Poèmes was therefore born.

Starting this December 2020, the 514-558-VOIX line offers readings by several French and English poets each week. A poem from the 1985-87 Dial-a-Poem Montreal archives is also available weekly. The service is of course free.

We hope this project will help everybody stay inspired and entertained through the long winter ahead.

Dial-a-Poem / Allo-Poèmes is produced by ARCMTL/ Expozine and made possible in part thanks to funding from the Canada Council for the Arts, le Conseil des arts et des lettres du Québec, SODEC and the Conseil des arts de Montréal.