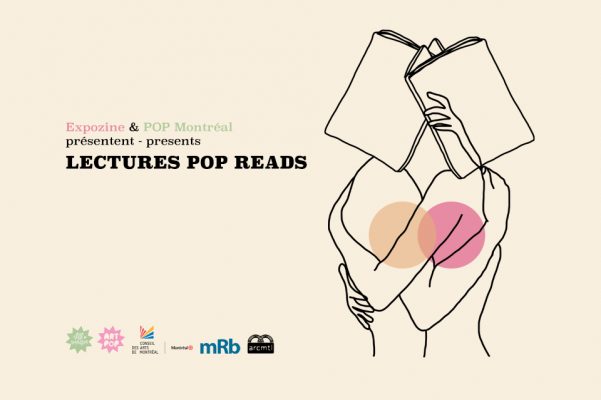 The evening will also be the opportunity to unravel this year’s nominees for all six categories of the Expozine Awards that yearly celebrate the best new publications presented at the previous edition of Expozine. We’ll also announce the details regarding the Expozine Gala and Expozine programming for 2019!

The readers for this edition are:

Catherine Cormier-Larose was born in Mauricie. She is the general and artistic director of Productions Arreuh, which has, since 2017, devoted itself to storming public spaces with poetry. She is behind a multitude of literature and poetry based events such as ‘’La Poésie prend les parcs”, la Rue de la poésie, Dans ta tête Festival and the Académie de la vie littéraire Gala. She is the Voix de la poésie poetry section coordinator while also being an independent critic and curator. Cormier-Larose has published in many magazines, zines and collective publications. She has performed and hosted on many stages across Quebec and overseas. She’s the author of L’avion est un réflexe court published by Del Busso.

Co-editor in chief of Postures journal, Marc-Antoine Blais is an MA candidate in literary studies (UQAM). Parallel to his research, which interrogates the modes by which the reading (“inspired”, or not) of literary texts (“experimental”, or not) stimulates the emergence of new forms of social living, he crafts instructive installations and strolls around the suburbs.

Mark Foss is the author of the novels Molly O and Spoilers, as well as the short-story collection Kissing the Damned. His fiction and creative nonfiction have also appeared in such literary journals as The Fiddlehead, The New Quarterly, B&A New Fiction, and subTerrain, as well as Canadian and American anthologies. A radio drama, Higher Ground, was broadcast on CBC. He lives in Montreal.

Marcela Huerta is the author of Tropico, a collection of poetry published by Metatron Press in 2017. She has worked at the Museum of Anthropology and Working Format as a Graphic Designer, and at Drawn & Quarterly as an Assistant Editor.

Alexei Perry Cox is the winner of the 2019 Vallum Chapbook Award. She is the author of the poetry collection Under Her and short fiction collection To Utter a Life’s Sentence. Her work has appeared in various iterations in The Puritan, carte-blanche, CV2, Hart House Review, Vallum, Matrix, Cosmonauts Avenue, Rusted Radishes, The Beijinger, Lemonhound and elsewhere. She has two wondrous young ones named Isla and Ilham.

Joshua Levy was the 2018 CBC Writer-in- Residence. He is a recent winner of the Carte Blanche/CNFC Creative Nonfiction Prize, the CBC Writing Competition, and the SLS Fiction Prize. His writing has appeared in The Malahat Review, Maisonneuve, The Rumpus, and in three Vehicule Press anthologies.

Nora Rosenthal is a writer, photographer and filmmaker based in Montreal. She recently completed a month-long stay at the Can Serrat International Art Residency in El Bruc, Spain, and participated in the inaugural Momus Emerging Critics Residency. She is the Arts and Culture Editor at Cult MTL.

Marie-Michèle Beaudoin spent her childhood in the woods of the South Shore of Quebec City, and her teenage years on the suburban North Shore. Always in search of a small nook of river and trees, she settled in urban Montreal five years ago where she now pursues an MA in Religious Studies, with a major in Feminist Studies, after completing several years of academic courses in visual arts.