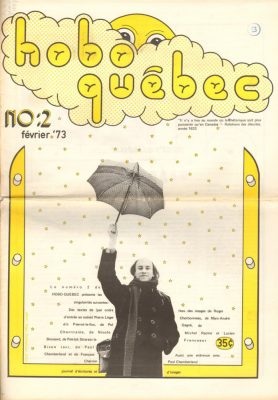 Looking back at Hobo-Québec : a literary touchstone
with André Roy, Sébastien Dulude and Simon-Pier Labelle-Hogue.

Hobo-Québec was one of the most influential counter-culture magazines. Compared to the wide range of material found in other magazines such as Mainmise, Hobo-Québec stood out with its literary content, which includes many authors now considered legendary.

The discussion will feature André Roy, who took part in the editorial committee and played an important role in including many of its esteemed contributors. The poet, who recently received the Alain-Grandbois prize of the Academy of Letters of Quebec for his collection The vast loneliness of Franz Kafka, will discuss the origins and production of this important publication.

It’s a rare opportunity to discover a forgotten icon of Montreal underground 70s culture, and its lniks with other important magazines of the era.

The event is a part of the fall 2015 conference and series, Contre-Culture: Existences et Persistances and Arcmtl‘s research project, Montreal Underground Origins.