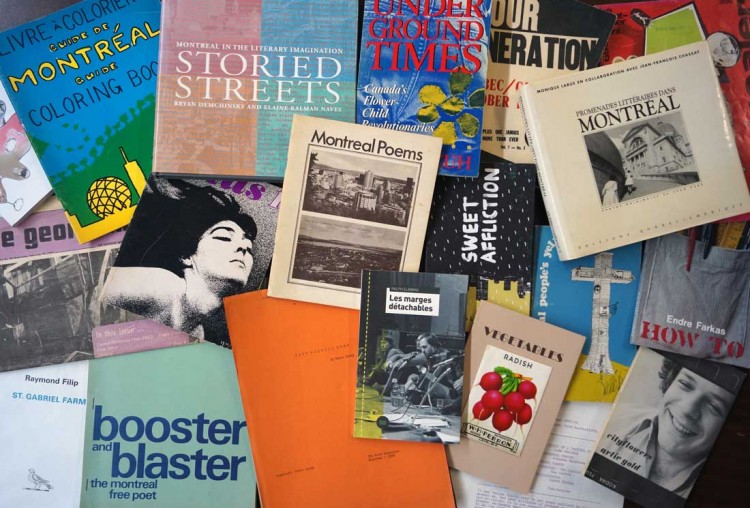 Local small press promoters and archivists ARCMTL / Expozine present a reading and discussion exploring two Montreals: the city that local writers wrote about in 1975 and the entirely new city in 2015. Writers will read excerpts, followed by an open exploration and discussion of the changes between these two eras.

This event is part of ARCMTL’s history and research project, Montreal Underground Origins, exploring the early days of the contemporary “underground” and independent arts milieu.

Bryan Demchinsky is a Montreal editor and writer. He is the author or co-author of four books, including After Auschwitz: One Man’s Story, with Hermann Gruenwald (McGill-Queen’s University Press, 2006), Storied Streets: Montreal in the Literary Imagination, with Elaine Kalman Naves (Macfarlane, Walter & Ross, 2000). The American Library Association chose After Auschwitz as its best university press book published in Canada in 2007. Bryan is the editor of many others books, two of which were published in 2014: Island of Trees, by Bronwyn Chester, and From Soup to Self-Sufficiency: Montreal’s Old Brewery Mission, by Alan Hustak. He was Business editor and Books and Visual Arts editor during a long newspaper career at the Montreal Gazette.

Ralph Elawani is the author of C’est complet au royaume des morts (Éditions Tête première, 2014), a biography of writer and filmmaker Emmanuel Cocke.
Last fall, in addition to collaborating a chapter on David Duchovny’s adventure in the adult industry for a book entitled Bleu nuit: histoire d’une cinéphilie nocturne (Éditions Somme toute, 2014), he published Les marges détachables (Éditions Poètes de Brousse, 2014), an essay on counter-culture in Quebec.
This summer, Elawani will publish a chapter in a book entitled Satanic Panic: Pop-Cultural Paranoia in the 1980s (Spectacular Optical, 2015) on the impact on Quebec of the “satanic panic” that hit the United States during the 1980s
He is a regular contributor to many magazines, blogs, webzines and events related to his fields of research and is currently working on a novel, as well as a dictionary of Jim Wynorski’s films.

Anna Leventhal‘s acclaimed short story collection Sweet Affliction (Invisible Publishing) won the Quebec Writers’ Federation Concordia University First Book Prize and was named one of the best books of 2014 by the CBC. A French translation (Douce détresse) recently came out with Marchand de feuilles. Her writing has appeared in Geist, Matrix, Maisonneuve, The Montreal Review of Books, and several short fiction anthologies. She was nominated for the Journey Prize, won a Quebec Writing Competition award, and was shortlisted for a Canada Writes award. She lives in Montreal.

Endre Farkas was born in Hungary. He and his parents (Holocaust survivors) escaped during the 1956 Hungarian uprising, and settled in Montreal. He has published eleven books of poetry and plays. His work has been translated into French, Spanish, Italian, Slovenian and Turkish. He most recently edited (along with Carolyn Marie Souaid) Language Matters: Interviews with 22 Quebec Poets.
He has read and performed widely in Canada, the United States, Latin America, and Europe. He has collaborated with musicians, actors, dancers and other poets to create interdisciplinary pieces that have been performed live and on radio across Canada and Europe.
His videopoem Blood is Blood, co written/produced with Carolyn Marie Souaid, won first prize at the Berlin International Poetry Film Festival in 2012. His novel Never, Again will be published in 2016.